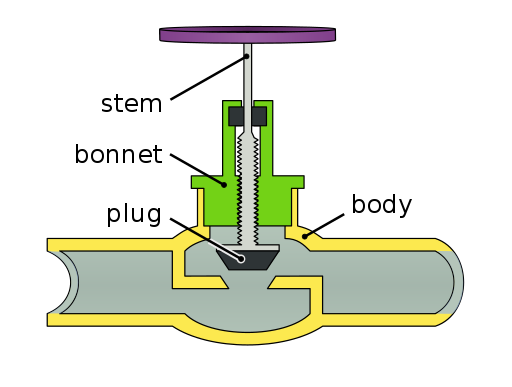 Globe Valve:  A globe valve, different from ball valve, is a type of valve used for regulating flow in a pipeline, consisting of a movable disk-type element and a stationary ring seat in a generally spherical shaped body.  A globe valve is also often referred to as a plug style valve.

Globe valves are named for their spherical body shape with the two halves of the body being separated by an internal baffle. This has an opening that forms a seat onto which a movable plug can be moved in to close (or shut) the valve. The plug is also called a disc or disk. In globe valves, the plug is connected to a stem which is operated by screw action using a handwheel in manual valves. Typically, automated globe valves use smooth stems rather than threaded and are opened and closed by an actuator assembly.  The actuator can of pneumatic, hydraulic, or electro mechanical (combination of a motor and a mechanical device to convert rotary motion to linear motion.

Spool Valve:  Spool valves, also known as directional valves, are one of the most fundamental parts in hydraulic machinery as well as pneumatic machinery. They allow fluid flow into different paths from one or more sources. They usually consist of a spool inside a cylinder which is mechanically (via pneumatic actuator or electro mechanical actuator )or electrically controlled (Solenoid). The movement of the spool restricts or permits the flow, thus it controls the fluid flow.

The spool (sliding type) consists of lands and grooves. The lands block oil flow through the valve body. The grooves allow oil or gas to flow around the spool and through the valve body. There are two fundamental positions of directional control valve namely normal position where valve returns on removal of actuating force and other is working position which is position of a valve when actuating force is applied. There is another class of valves with 3 or more position that can be spring centered with 2 working position and a normal position.

Check Valve:  A check valve or one-way valve is a valve that normally allows fluid (liquid or gas) to flow through it in only one direction.  This valve is often used as backflow prevention.  Check valves are two-port valves, meaning they have two openings in the body, one for fluid to enter and the other for fluid to leave. There are various types of check valves used in a wide variety of applications. Check valves are often part of common household items. Although they are available in a wide range of sizes and costs, check valves generally are very small, simple, or inexpensive. Check valves work automatically and most are not controlled by a person or any external control; accordingly, most do not have any valve handle or stem. The bodies (external shells) of most check valves are made of plastic or metal.

Lift:  A lift-check valve is a check valve in which the disc, sometimes called a lift, can be lifted up off its seat by higher pressure of inlet or upstream fluid to allow flow to the outlet or downstream side. A guide keeps motion of the disc on a vertical line, typically perpendicular to the flow, so the valve can later reseat properly. When the pressure is no longer higher, gravity, a bias spring, or higher downstream pressure will cause the disc to lower onto its seat, shutting the valve to stop reverse flow.

In-line:    An in-line check valve is a check valve similar to the lift check valve. However, this valve generally has a spring that will 'lift' when there is pressure on the upstream side of the valve. The pressure needed on the upstream side of the valve to overcome the spring tension is called the 'cracking pressure'. When the pressure going through the valve goes below the cracking pressure, the spring will close the valve to prevent back-flow in the process.  This type of valve’s disk typically lifts parallel to the flow.

Control Valve:  A control valve is a valve used to control fluid flow by varying the size of the flow passage as directed by a signal from a controller. This enables the direct control of flow rate and the consequential control of process quantities such as pressure, temperature, and liquid level.

On/Off Valve:  On/Off valve also known as isolation valves, shutoff valves, and discrete valves are designed to shutoff and to open fully with no ability to regulate effectively through the full range of travel.  Typically, this type of valve is used isolate fluid systems and used to allow fluid transfer in one direction.  This type of valve can be of Globe, Gate, or Ball valve styles and may be actuated by an automated actuator or by manual control (hand wheel or handle).  When used in process piping, typically manual on/off valves are used in conjunction with automated on/off valves to provide isolation during maintenance and troubleshooting.

3-Way Valve:  A 3-Way valve, also referred to as a directional valve can be used in a variety of applications and its function is dependent on how it is piped into the system.  This type of valve will have three ports or inlets.  Each port can be used as an inlet or an outlet depending on how it is piped.

Typical uses of this type of valve involve the inlet port (Port #1) as the supply port of the media.  The outlet port (port #2) as the port connected to the vessel to be filled.  The drain port (port #3) as the port which allows the media to be evacuated from the vessel.  During normal operation, port #1 is blocked from port#2, preventing the media from passing from #1 to #2.  The fluid is free to pass from port #2 to #3.  When the valve is actuated, the stem position shifts allowing media flow from port #1 to #2 and blocking port #3.

Backflow Prevention: As the name suggests, backflow prevention is the action or the desired action of preventing fluid to travel backwards upstream of the supply valve, or pressure.  Typically, check valves are used for this type of application.

Seat:  The term valve seat can have two definitions when discussing valve terminology.  The first is fairly common place and describes the area where the plunger/disc/plug/ring/ or seal makes contact.  In this definition, the "Seat" is the stationary component and the plunger/disc/plug/ring/ or seal is the dynamic component.  In most cases, the seat is constructed from metal and is the harder of the two materials between the static and dynamic components.  However, some soft seated designs to construct the seats of the softer material.  The other definition refers to the seat as the dynamic component and uses some other term to designate the area of seating.  It is important to know which way the word seat is being used when discussing valve terminology.  www.durbinvalve.com and all literature and content contained within will always refer to the seat as the static component and will refer to the dynamic component as the seal or stem.

Stem:  The valve stem, or sometimes called the spindle refers to a generally cylindrical rod which transfers the force from the actuator to the valve seal.  This stem, or stem assembly typically protrudes through the body and will be packed or sealed around the outside diameter to prevent media fluid from escaping the body.  In soft seated designs, the stem will be attached to a disc or seal but is does not actually do the sealing.  In many hard seated designs the stem is machined to contain a seat angle and does provide a sealing edge.

Body: The valve body is the enclosure which will have at least one inlet port and one exit port.  This vessel contains the mechanism to block, direct, or control fluid motion.  The body can be cast or machined from billet, and can be configured with multiple connection styles such and pipe threads, flanges or a manifold mount.  Typically, the body makes up about 50% of a valves weight and is the main concern when designing to meet specific pressure and or temperature requirements.

Gland: Gland or packing gland, also sometimes referred to as the bonnet is a part of the valve that acts as the transition piece between the stem/spindle and the body.  This component contains some sort of seal or packing that prevents the fluid from escaping the body by sealing against the sides of the gland and also by surrounding the stem.  Typically, there will also be some sort of static seal between this component and the body to prevent and fluid leakage at this junction.

​Enter your email address to subscribe to this blog and receive notifications of new posts by email.